What if the classic bomb finding game from Windows 95 were a roguelike?

Hey! I'd like to fix the Key & Telescope, so I can play it properly. Is there a git repo I could throw a bug fix into?

Here’s the repository on GitHub!

There’s nothing documented, and I made it for js13k so some of the code is pretty weird!

Played this one for a couple hours and it was a blast (no pun intended). Thanks for the fun game (even if I relied on the broken telescope a bit too much) 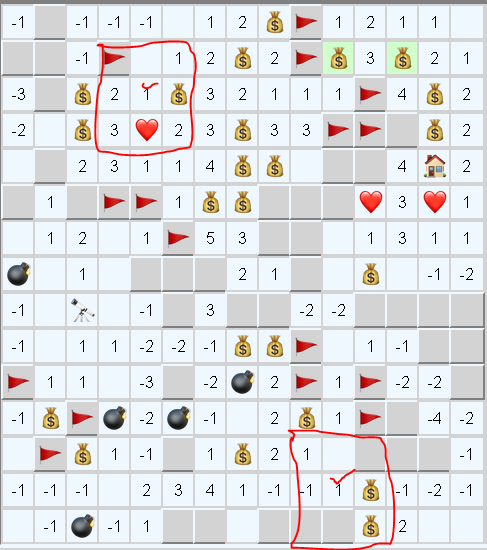 The numbers should be adding up how many positive and negative tiles are adjacent (including diagonals) to the tile.

Thanks for reply now I can play it

very cool game! i played it for an hour or two and even managed to win :)

i like the mouseover highlighting of red & green. the lock mechanic is really neat too. and the core minesweeper-ish mechanic is super engaging.

i didn't really mind having to figure out how the game works, but other people might feel differently.

i did find a couple bugs (or what appeared to be bugs), but they didn't really hurt my enjoyment of the game:

there's a bug (i assume) in that you can use the telescope multiple times when you get it.

there's a square you can hit that makes the locks go away? but it looks like a regular square both before and after you click it?

so yeah, just some stuff to look into if you feel like it. but i think it's super fun as-is. thanks for making it! :D

Thanks for playing the game! :-)

Yeah, I guess I never made the telescope actually consume an item charge during the jam… haha, oops!

The square that doesn’t reveal but removes the locks is a key. I think it shows up correctly in the actions log but definitely doesn’t reveal for some reason…

I’d definitely like to revisit this game idea sometime, it was surprisingly fun to work on.

Your minesweeper numbers are fucked up, there was a bomb adjacent to a completely blank tile when I started the game

The numbers in this game work differently than in traditional Minesweeper.

Maybe I'm a total idiot but I don't quite understand this. Seems like sometimes hitting a bomb is inevitable even if I've flagged everything that could possibly be a bomb. Am I missing something? There must be some fundamental difference between this and minesweeper but I'm not getting it.

I'm glad you got it worked out!

I've thought a little bit about how I might do that in the future, but not quite sure how to go about it.

what a lovely spin-off <3 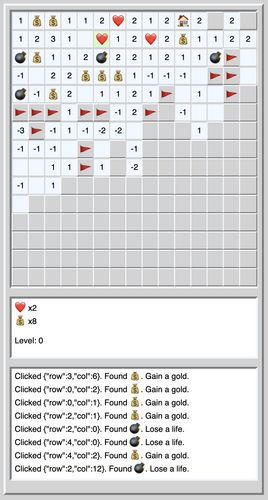